My zip code is 33884, my internet package is ultra, my network setup consists of the modem from Spectrum (Hitron EN2251) and a Google WiFi router but while doing these tests I was plugged directly into the modem with a brand new cat5 ethernet cable. I am not sure how to access the modem logs as it seems I can't directly connect to the modem like I could with a router.

I just switched from Frontier to Spectrum because of a price increase on Frontier's end and I saw that I could get a better package from Spectrum so we canceled Frontier and got the self-install kit from Spectrum 4 days ago. I installed it on the same day and it went smoothly. The problem started when my kids let me know they were unable to use discord (VoIP app) and were having issues with pings on games and while doing their schoolwork as they are home-schooled.

I work from home and started noticing intermittent issues with connectivity and lag myself so I started doing some investigating. Here is a speed test result, which is fine except for the upload speed in my opinion: 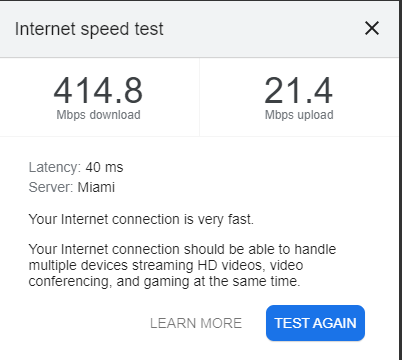 and here is the result of PingPlotter using the target of google.com: I have called tech support and they told me there is nothing wrong from their end, and from what I can read online that is pretty typical. I am just wondering if there is anything else I can do from my end to try and resolve the issue because this is a dealbreaker for me. If my kids can't use the internet without constant connection drops and I am getting this amount of packet loss while being directly connected to the modem than there is an issue. I have already swapped out the router twice to make sure it wasn't faulty equipment.