Hello! About 3 weeks ago, I installed the Spectrum Gig internet plan upon moving to a new place. Since install, my internet speeds, when working, have been very good (800+ down), however, my network regularly experiences intermittent disconnects.

These disconnections don't last long - usually between ~5 seconds - 120 seconds. They usually happen within short succession of one another (say, 10-25 disconnects within a 1hr period), but appear to be entirely random (happening in the middle of the day, prime time, in the middle of the night, seemingly equally).

I've tried using 3 different routers, including 2 that I know work from previous installs prior to moving. I've also used my Spectrum-provided modem, as well as my own Motorola MB8611, recently purchased. The symptoms and frequency appears to be the same no matter what equipment I use. The modem is directly connected to a wall coax jack, which is run directly to a Spectrum-owned box that connects multiple townhomes (and thus, unfortunately, out of my control).

I've contacted Spectrum more than 4 times over chat for this issue, and had a tech visit specifically for it as recently as this past Sunday. During the tech's visit, it was indicated that the line and signal looks normal, and that a dispatch to the "maintenance team" would need to be made. After calling back today, it was indicated to me that this dispatch was apparently never made, and so they've scheduled me for another tech visit at the end of next week - the soonest possible I was told.

Here are a current snap of my modem's reported connection info. Note also that my modem has reported this event during outages: 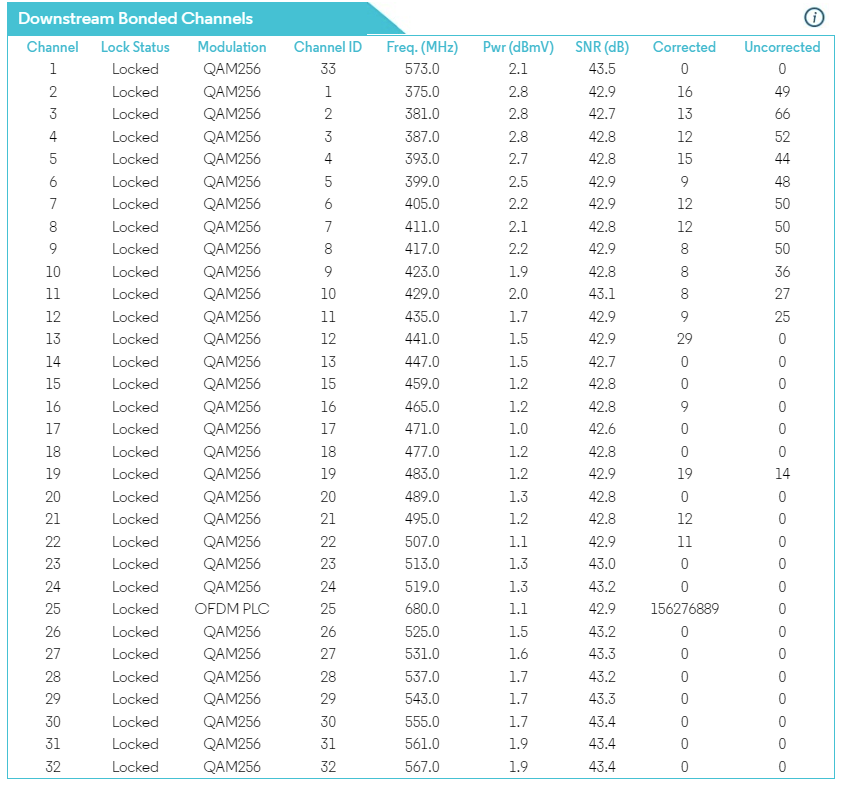 I'm asking here to see if there are any other possible tweaks or changes I could make on my end to help remedy this issue. Given that multiple users in my household work from home, internet disconnects of this nature are extremely disruptive to things like giving presentations virtually, etc. Given that my connection information provided by my modem looks normal, and that the tech had previously indicated the same, I'm curious what else could be causing these recurring symptoms? Thanks for any insight as to where to look next!